Trading Bitcoin (BTC), crypto and other assets can be intimidating for those new to the investing scene; and even veteran investors go through bouts of uncertainty where they second guess themselves, trade from their gut, and only truly see the signals an asset was flashing when provided with the benefit of hindsight.

For many new traders the sight of lines, squiggly oscillators, randomly numbered moving averages and blue and green candlesticks are disconcerting as it is hard for the untrained eye to decipher all the data contained within an asset’s chart.

The good thing is, with time, practice, trials and many errors, we all learn how to become better traders and once one understands how to use the relative strength index (RSI), moving averages, the Bollinger Bands indicator, etc. all those squiggles and random colors begin to make sense.

Being able to decipher the meaning behind some of the most fundamental candlestick patterns is also an important skill that can help the novice and veteran traders to confidently know that they are making the right investment decisions.

While the patterns do provide insight when viewed in isolation, they are even more useful when combined alongside a strategy that includes identification of support and resistance levels, analysis of overbought and oversold conditions, using moving averages and other tools.

With that said, here are five more bullish candlesticks patterns that every new and veteran trader should know.

The Bullish Harami pattern is a reversal pattern that consists of two candles. The first candle (left) is red with a longer body than the accompanying green candle, which, if measured, fits within the body length and price range of the first (red) candle.

When observed on the daily timeframe, the left (red) candle is bearish, whereas candle on the following day is bullish and the price gapped up on this day and refused to move below the close of the previous day. A gap up is the term used to describe when the opening price of the current day is higher than the close of the previous day’s candlestick.

Typically, once can find this setup at the end of a downtrend as the price reaches a bottom and begins to reverse course. Bullish Harami patterns are sometimes followed by the Three White Soldiers pattern. 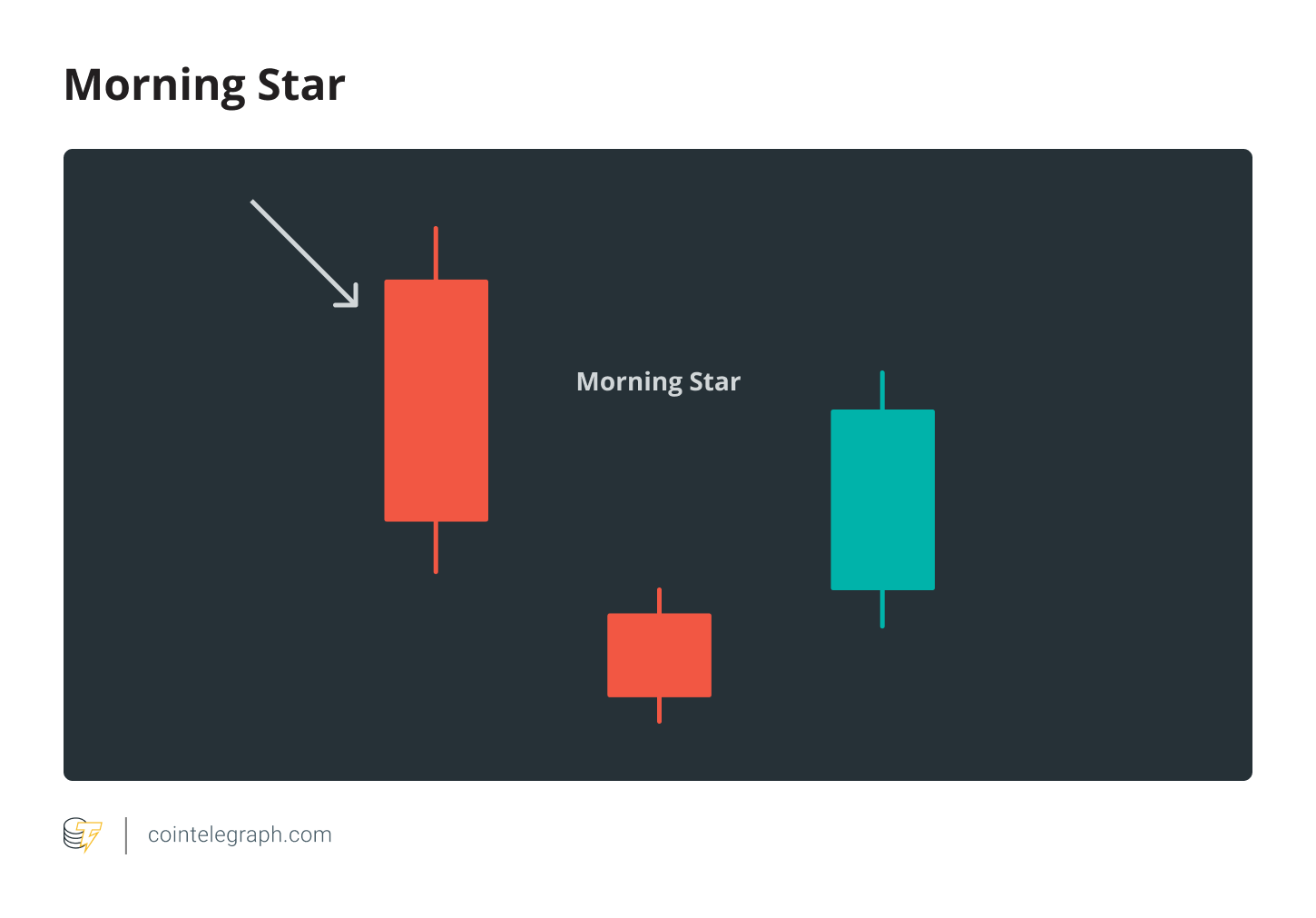 The Morning Star candlestick pattern is also a signal of a bullish reversal and typically signals the bottom of a downtrend. The set is comprised of three candlesticks with the first (left) candle being a large red bearish candle that is part of the sequence of the current downtrend.

The second candle commences with a bearish gap down and the candle closes below the previous candle. Variations of this pattern can see the second candle be bullish or bearish but it is usually short and representative of a Doji candle.

The following candle (third on the right) commences with a gap up open that rises to the midpoint and sometimes above the close of the very first candle. 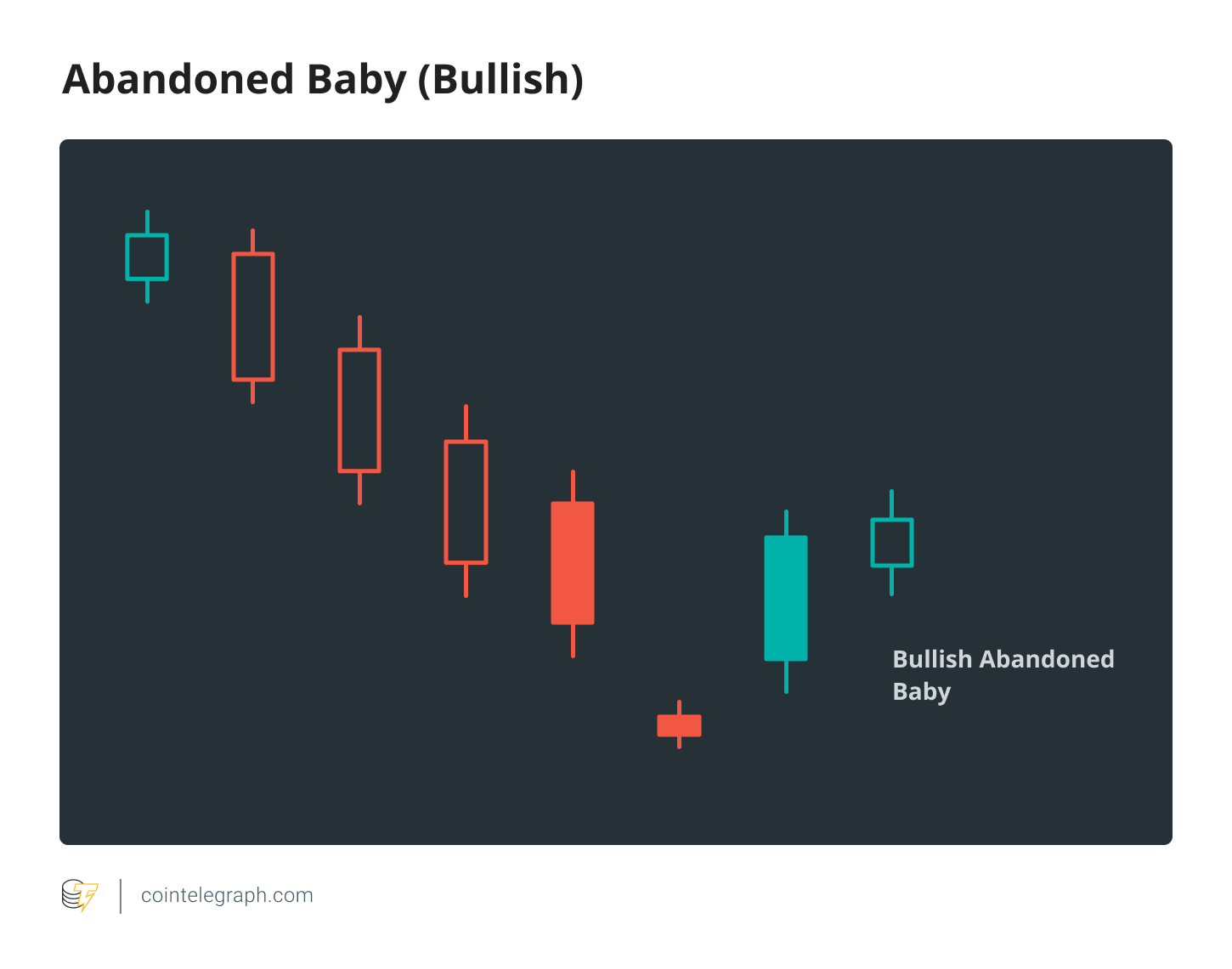 The Abandoned Baby candlestick pattern is often seen at price tops and bottoms and can be a relatively reliable indicator when it takes place after whipsaw price action. Usually, in a bullish reversal scenario, the pattern begins with a long gap down from the first candle, which is following the trajectory of the current downtrend.

This candle is followed by a Doji candle that follows the downtrend but with wicks that are below the candles to the left and right of it. The third candle starts with a strong gap up open, which quickly pulls the price above the Doji candle and above the daily open or close of the very first candle in the sequence.

This trend reversal tends to happen quickly and is known for catching traders who are short off guard, sometimes triggering a short squeeze. 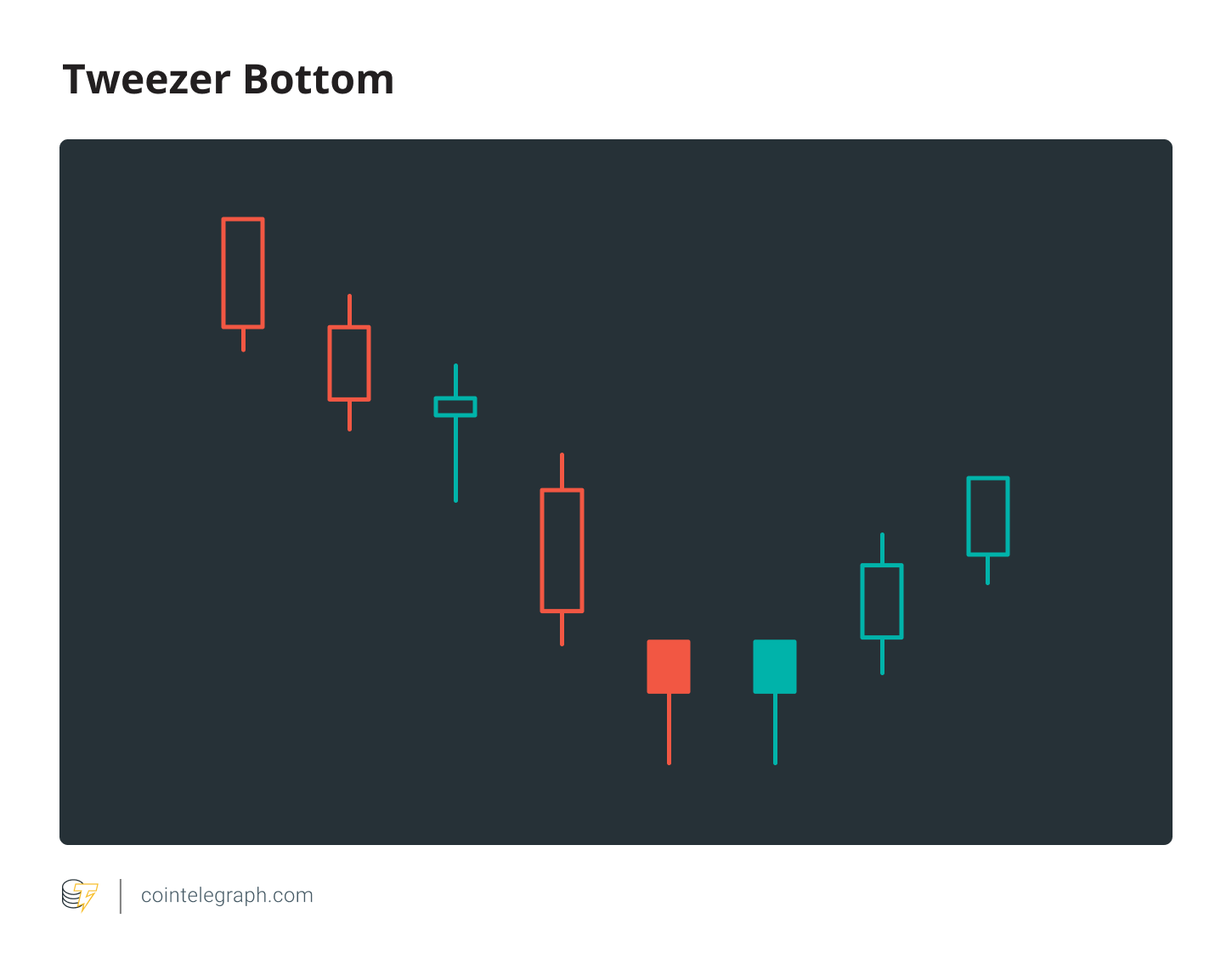 The Tweezer Bottom pattern is one seen frequently in the crypto sector, especially with Bitcoin price action. The pattern is comprised of two candlesticks that are nearly the same length and price range.

When signaling a bullish trend reversal the first candlestick is red, indicating weakness, while the following candlestick is green, confirming a change in trend. Both candlesticks have the same (or nearly the same) low and this is shown by the bottom of their bodies being at the same level.

Further confirmation that a bullish trend reversal is in order can be determined when the pattern occurs at market lows, support levels, or key Fibonacci retracement levels. 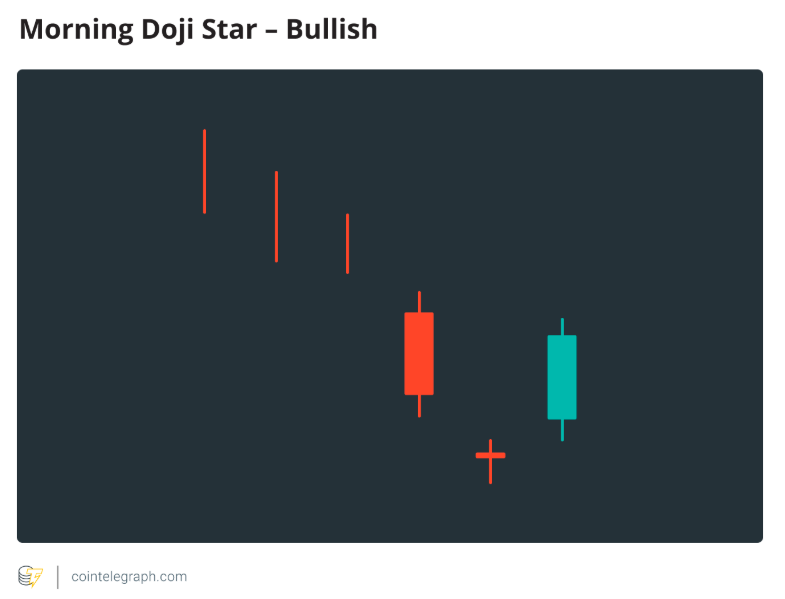 The Morning Doji star is quite similar to the Morning Star candlestick pattern and both are signals that a bullish reversal is in the making. When viewed on the daily timeframe it hints that the downtrend is weakening and possibly on the verge of a reversal.

The first candle is in a clear downtrend with a long red (or black) body. The second day sees the price drop to create a Doji candle (the star) and traders can interpret this as a sign of trend weakness since sellers are unable to push the price lower than the close of the previous day.

On the third day, the candlestick (green) manages a strong open and typically closes above the middle of the candle from day one.

While there are a countless number of bullish and bearish candlestick patterns and variants of the classics listed in this article, the ones discussed in this article are quite common in crypto charts so it’s important that novice and veteran crypto traders take a moment to get familiar with each one.

The views and opinions expressed here are solely those of the author (@HorusHughes) and do not necessarily reflect the views of Cointelegraph. Every investment and trading move involves risk. You should conduct your own research when making a decision.

Bitcoin Rallied 80% Without Any Gov’t Bailout: Time to Get Bullish?

Bitcoins on the Move — Is BTC Price Inversely Correlated to Mempool Size?

Crypto Taxation Around the Globe — What Do Regulations Look Like?